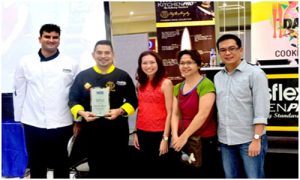 Audience members have enjoyed the free taste which Chef Gene prepared highlighting four Davaoeño dishes that are all made from Davao’s famous and fresh ingredients.

He shared the recipes for Pinakbet Paella made of Davao’s fresh vegetables, Sarsaparilla Chicken to feature the rich poultry industry of Davao, Maja Durian, and Army Soup.

The program won’t be complete without Chef Gene’s famous Live Fruit Ninja portion where he cut the watermelon in mid-air in front of the live audience using KitchenPro 10″ Chef’s Knife.

Chef Gene wrapped up the event by raffling offKitchenPro knives, had his autograph signing and picture taking at the end of the program.